It seems spring has sprung in Southern Wisconsin, at least for now.  With the next storm predicted for Tuesday, the ups and downs of March begin.  For now, however, we are seeing temps around 60 and the natives are restless.  Yesterday, especially  with the university crowd, the warmer weather caused a chain reaction of shorts, capri pants and sandals. Everyone seemed to be outside basking in the sun and enjoying all nature has to offer.  We observed boats heading out to the lakes, cyclists on the bike paths, dogs walking with an extra zip in their step and a prevailing feeling of well-being.  We know this is not really spring, but simply that early season teaser that tries to trick us into believing winter has passed.  Regardless, we are hopeful that the cold is waning and plans are in the works for bathing suit season.

That said, it serves as incentive for many of us to lighten our winter eating habits so when it is clearly time to trade the long johns and show some skin, we will be prepared.  Last weeks recipe, although amazing, was a bit fussy, so I thought an easier preparation might be in order for today.  I was intrigued by a recipe I saw hailing “carb-free” bread.  As a bread lover, it was a must try.  I admit I was skeptical of the possibility of such a creation but it was easy and I just had to see for myself.

Here is how it went down in my kitchen.

Preheat the oven to 300 degrees F and grease a large baking sheet.

Note: Cloud bread has a super-mild egg flavor. Garnishing it with herbs (like rosemary) before you bake it is a nice add-on and a delicious way to balance it out.

After they’ve cooled, use the light and airy bread thins to make healthier sandwiches, mini pizzas or breakfast toast. 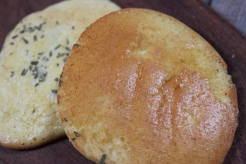 This is how the original read with the exception of the addition of the flaked sea salt which I added to boost its savory side.  Good call, I must say.  Although the original photos on Pure Wow showed a product closely resembling pita bread, mine reminded me more of a light and fluffy pancake with a hint of sweetness from the honey.  It was hard to imagine them as a base for a sandwich or pizza as stated above, but they were extremely tasty, nevertheless.  For me, they seemed more appropriate for breakfast or brunch topped with jam, maple syrup or chocolate hazelnut spread, if that pleases you.  I will give these another try but might substitute maple syrup for the honey or skip the sweetener altogether substituting unsweetened apple sauce, sweet potato puree or avocado mash.  A tiny amount of flour may also help the texture be more “bread-like” but they could no longer be labeled free of carbs.  I feel a cloud bread play date in the near future. I promise to keep you updated.  I would love to hear what ideas you have for variations on this theme.

In addition to warmer weather and cloud bread, a couple of other sweet things happened this week.  First of all, it was our grandson, Henry’s eleventh birthday.  He is a sweet boy who loves to express his creativity in the kitchen, much to his Nonna’s delight.  Recently, his older brother, Charlie (soon to be 14), whose passion is music, requested a lesson from grandpa  (musician and retired music teacher), much to his delight. This seemed like a perfect time for a cooking lesson as well.  While the horns were practicing a piece for an upcoming musical festival,  Henry and I headed to the kitchen where we jointly made dinner for everyone.  During our time in the kitchen we had a discussion about how most chefs have their own knives that only they use and care for.  They tend to be protective as a sharp knife is the most important tool in the kitchen. From that was born the idea to get him a chef’s knife for his upcoming birthday.  After some research we decided on a set of knives and a case to keep them.  SCORE!  I am not sure what was the bigger hit, the knives or the case.  Regardless, he went home and insisted he cook dinner for everyone giving strict instruction that his family was welcome to look at the knives but they were not to be used by anyone but him.  The instruction was also to never ever ever put them in the dishwasher.  Just yesterday, Charlie received a first place on all the trumpet pieces he performed.  All said, I think it fair to say, Nonna and Grandpa came through in a big way and our hearts are full.

Whether it is “carb-free” bread or a giant loaf of sourdough, what matters is putting your love into the food you make and then spreading that love to others.  You know what I always say, keep spreading the love, one dish at a time.  Until next time, I wish you all the best, from my kitchen to yours.  Jeanne