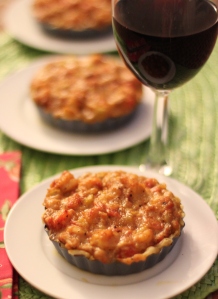 Crawfish Pie where have you been all my life?  Seriously, as much as I love the cuisine of New Orleans, somehow this dish has eluded me until yesterday.  As I promised in the post about my “boyfriend”, John Besh, I took on the task of making his recipe for Belle River Crawfish Pie.  Believe me when I say, it got a standing ovation from my diners and myself.  My husband went as far as to say this might be the best thing I ever made.  I have made a lot of food for him over the years so, high praise for this recipe.  A little spicy but well-balanced, every bite was a taste treat.  We all had to hold ourselves back from eating more even though our stomachs told us no.

I followed John’s instructions to the letter except for one thing.  I used red bell pepper instead of green.  I did this because I didn’t have green and red was on hand but also because I strongly prefer the taste and sweetness of the red versus its green cousin.

I started by making shellfish stock using shrimp shells, leeks, thyme, black peppercorns, bay leaf, garlic and of course the holy trinity of New Orleans cooking, carrot, celery and onion.  I simmered it for about two hours and then strained the solids and refrigerated it.  If you aren’t so inclined to make your own, you could substitute a commercial seafood or fish stock or use the bottled clam juice.  I also made John’s recipe for the pie dough.  He uses butter for the fat (7 T to 1c of flour), 1 teaspoon of sugar, 1/4 t of salt and up to 4 T of cold water but again if you have a dough recipe you prefer use that or even a good commercial one will do.  I say this  because the filling is what really makes this preparation so I barely noticed the crust, not to diminish his recipe as it was really good.

Before I get into the recipe I want to talk a little about the crawfish or crawdads as they are called in Bayou country as opposed to crayfish in other parts of the world.  They resemble a small lobster as can be used as a substitute in many recipes.  They are often  served whole or called for the tail meat which is where the bulk of the meat is found.  Although you can buy them whole and spend the rest of your life digging and picking to get 1 lb. of tail meat, I recommend buying a package of tail meat already to go.  I find this at my local fish market, usually frozen but how you find it will depend on where you live.  It can be ordered online as well.  As a side, Louisianans call their state the “crawfish capital of the world” as a great majority of the U.S. harvest comes from the waters of the  Mississippi basin.

4T flour, plus more for dusting

**John says you can make this in a 9-inch pie pan but know it may be slightly runny when you serve it.

This recipe may seem a bit fussy but the end result is really worth the effort.  It is spicy, crunchy, creamy and full of flavor.  Every bite is like a party in your mouth.  Not into crawfish?  Try substituting lobster or shrimp.  Either would work but I urge you not to discount these flavorful little “mudbugs”. They are cheaper than lobster and every bit as tasty.

If you haven’t yet checked out “My New Orleans” by John Besh, Do yourself a favor and do it sooner rather than later.  It may just cause you to develop a culinary crush and fall in love with the flavors of New Orleans and this adorable chef.

I just checked out his new book, “My Family Table” from the library and now I know it is a must addition to my collection.  You will love it too!

I urge you to make this recipe and see for yourself the positive reactions of your friends and family.  I would love to hear what they have to say.  I look forward to hearing from you!

This entry was posted in Uncategorized. Bookmark the permalink.