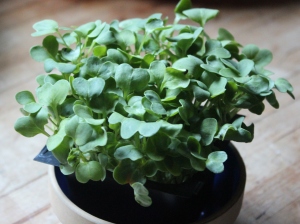 Did you know the Dane County/Madison, WI., Farmers Market is the largest producer-only market in the United States?  All the products are produced locally by the vendors behind the tables.  No resale allowed!  How fortunate for me that this is in my area and I get to go as often as I wish year round!  In Summer it rings around the grounds of the state capital moving inside in Winter.  Something to be happy about for sure.  You know I am always on the lookout for new and interesting things when I visit the market and my find for the week is radish sprouts!  Sprouts seem to emerge everywhere during the seventies.  They topped sandwiches, soups, salads and everything else that could accommodate them. I believe they contributed greatly to the thought that healthy eaters were thought to eat twigs and rabbit food.  The trend continued through the 80’s and 90’s but favor was lost when a salmonella outbreak was traced to sprouts.  Several  market vendors who specialized in this product went belly up after this as the public was not willing to take the risk.  They have a short shelf life of 2-3 days which makes them vulnerable as well.

Sprouts are best eaten raw.  Even the popular Mung bean sprouts, most often seen in Chinese cooking, are best when tossed in at the end of the cooking process.  Other seeds and beans can also be sprouted-such as, alfalfa, radish, lentils, soybeans, and wheat berries.  This week, I was shown a different method for cultivating sprouts that makes them less vulnerable to contamination and extends their shelf life considerably.  It is a simple process of planting seeds in dirt.  The vendor where I purchased my radish sprouts informed me that you simply sow the seeds in a small pot, water and place them in a warm sunny spot until they start to grow.  When they reach the desired height, you place the pot in a shallow bowl with water to keep them fresh and alive.

To use, just snip the tops and there you have it!  Easy, safe and delicious.  In addition to radish sprouts, this vendor had pea shoots, arugula and several other varieties available.  The pea shoots and arugula will renew themselves when trimmed which makes them a really good buy but I chose the radish sprouts for their peppery flavor.  They have added zip to my salads, omelets and sandwiches which I have enjoyed immensely. I am going to try to grow some of my own from seed.  It looks simple and fun with a payback worth waiting for.  Because they are one of the only foods we eat that are totally alive, they are said to have many health benefits.  Safe, healthy, easy to grow, and most of all delicious.  Sounds like a winner to me.

Try it and let me know what your experience is.  I love to hear from my readers!!

This entry was posted in Uncategorized. Bookmark the permalink.